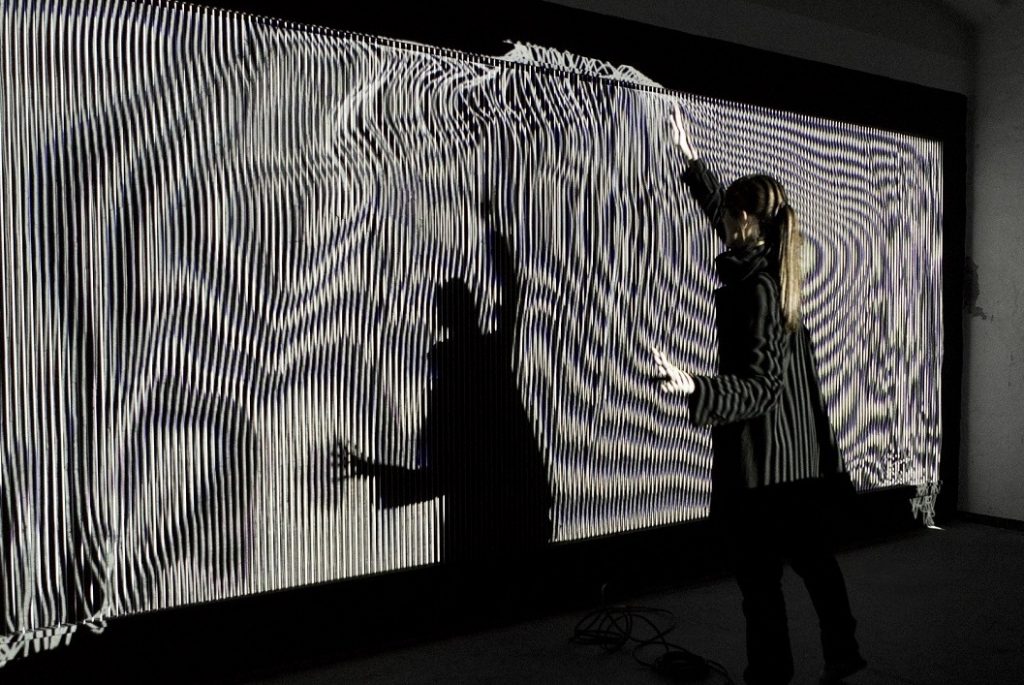 _ “Pictures that attack the eye” was the explaining headline of a feature on Op-art in the Time Magazine published on October 23, 1964. “Preying and playing on the fallibility in vision is the new movement of “optical art” that has sprung up across the Western world. No less a break from abstract expressionism than pop art, op art is made tantalizing, eye-teasing, even eye-smarting by visual researchers using all the ingredients…” were the opening lines and in fact, Op-art compositions create a sort of visual tension in the viewer’s mind that evoke the illusion of space and movement.

Cuppetelli and Mendoza further what has been called Op-art since the 1960s. Op-art – the abbreviation for optical art – is based on illusions that occur in the interplay of geometry, optics, and perception. Their characteristics are drawings, paintings or reliefs that engender the impression of movement, of flashing or vibrating, of swelling or warping although they are static.

Yaacov Agam, Bridget Riley, Jesús Rafael Soto and Viktor Vasarely are among the internationally known artists for their Op-art works. They became infatuated with physics, mathematics and graphics studies, and experimented with textural effects, shadow, light, and perspective. With their artistic research, they aimed to blur the borders between painting, sculpture, and performance. In their footsteps, Cuppetelli and Mendoza explore the dynamics of the interaction of graphic pattern, spatial structures, space and movement in their works. They play with the overlay of the analog and the digital sphere to explore the way and the variety of shapes and forms engendered by each of their settings. Their works are objects, installations, and performances at the same time.

In 1965, the Museum of Modern Art in New York celebrated Op-art with the exhibition “The Responsive Eye” artists such as Josef Albers, Frank Stella, Ellsworth Kelly, and Agnes Martin were featured. It focused on the perceptual aspects of art that result from the illusion of movement and the interaction of color and form. It caught major public attention and Op-art became influential for architecture, design, fashion, and music. Vasarely credited the invention of Op-art with the experience of studying the way the intense light in southern France that affected his vision. Carlos Cruz-Díez, Julio Le Parc, Heinz Mack and Guenther Uecker are among those who deepened their work with optical phenomena by working on the interplay of light and perception. Expanding their approach, Cuppetelli and Mendoza work with interaction of the properties of light as the primary medium of the visual sphere and as the medium of display of the digital sphere. In their works, they refer to light as the medium that governs the visual experience.

In the 21st Century, computer programs reproduce optical patterns with ease that had been done by hand and over time by the artists of the 20th century. To date, the artistic research that encompasses the geometrical, optical and perceptional aspects can be found in the field of “projection mappings”. Here optical effects are used to alter surfaces of 3d objects or of architecture by projection. Artists and advertisers use it to add dimensions or and notions of movement onto static objects. Projection mapping has been used for vj’ing and for gaming, it has been set on stage by dance, theater, and entertainment and it has been used by fine artists like Refik Anadol, Klaus Obermaier, and Quayola among others. Due to its stunning effects, it has been widely used in advertisement and event. Due to its non-invasive qualities, it has been used in historic, culture-historic and art-historic contexts as a method of research as well as of mediation.

Projection mapping dates to the 1960’s as well. Filmed head-shots of singers projected onto busts of the singers became – as the “‘Grim Grinning Ghosts” – part of the “Haunted Mansion”-ride in Disneyland in 1969. The same technic was used by the American artist Tony Oursler for his signature works of animated and projected faces onto arranged soft cloths or found objects from the 1990s. In the viewer’s perception, the motion of the digital image is transferred to the static object which is the projection ground. To date, the interplay of tracking physical objects to superimpose digital imagery is constantly refined.

Cuppetelli and Mendoza explore these mapping techniques in abstract forms. They work with geometric forms and patterns only. When they started to experiment with the interplay of textile objects and digital projections, they encountered a series of interference patterns known from analog drawing, painting, and printing. The moiré pattern caught their interest. For it to appear, two or more geometric patterns must be close but not be completely identical and positioned slightly shifted, rotated or displaced. Annica Cuppetelli and Cristobal Mendoza combined their knowledge on fibers and textiles – her background – and the expertise on digital technologies and projections – his background – and started to explore the interchange of their two realms working on interference patterns.

Patterns, repetition, and interaction are aspects relevant to both textile processing and computer programming. They took their commonalities to create works that reflect on the intersection of these two spheres. Until today, their focus is on installations based on textile structures fused with graphical digital animation.

By not only mapping the object but by mapping the viewer as well, Cuppetelli and Mendoza realize works that are responsive to their audience. The full range of properties of their body of work shows when visitors not only view but also move and interact in front of the installation. The installations respond to their viewers with change. They translate the viewer’s movement into their setting and allow a playful exploration to unfold. In projection mapping, the development of the responsive circle is great motivation for all the developers and constantly new tools and interfaces pop up to improve the interaction.

With their conceptual approach, Cuppetelli and Mendoza are part of the artistic development titled “Departure from the Image”. At a glance back into art history, we understood with Vincent van Gogh in the 19th Century that color is not bound to an object. Not much later, Kazimir Malevich exiled the object from the picture. In 1921, Alexander Rodchenko introduced the “Death of the Paintings”. Around the same time, in 1913, Marcel Duchamp designated his first “ready-made” and coined the term. Seeking an alternative to representing objects in paint, Duchamp began presenting objects themselves as art. After World War II, movements like Fluxus, Happening and Performance Art, as well as Land Art, Kinetic Art and Light Art were part of the ongoing artistic research pursuing the idea of withdrawing from the image. With the advances of media technologies, the development of Media Art brought TV experiments, closed-circuit video installations, and responsive computer installations. They introduced the potential to include the spectator as a participating user. At the same time, the “Light and Space” movement with works of Robert Irwin, James Turrell, Marian Zazeela among others referred to the experience of seeing as essential. Subjectivity, as a priori of perception, became emphasized and consequently, the model of an objectively describable and static artwork was discarded. Due to the exploration of perception the ratio of subjectivity and objectivity in the 20th Century, the status of the viewer became an active one. Artists have a share in these discourses with a growing plurality of responsive, interactive and participative concepts. Cuppetelli and Mendoza are one of them. They started their cooperation with a series of works called “Nervous Structure”: “Nervous Structure is a series of site-specific, interactive installations consisting of string and fabric structures illuminated with interactive computer graphics that react to the presence and motion of viewers. The piece consists of three planes that intersect: the physical plane (the structure), the virtual plane (the projection) and the perceptual plane (the viewer and his/her interaction). It is in these various points of intersection that the piece works, and our interest lies in the perceptual problems that arise within these intersections.”

Their installations include reliefs and objects as centerpieces of the responsive environments and their site-specific interventions make use of architectural features to build reactive works. In the tradition of the Op-art movement, their first environments were done in black and white, and since 2015, they include color phenomena in their works. Both started their independent careers after finishing their studies and started their joint artistic research in 2010. Sharing his studio for a while, they discussed the options of intertwining their realms and started to explore the idea. By now, they received several awards, including the Detroit-based Kresge Art Award of $ 25.000 in 2015: “The Kresge gives us a push into the next stage of our careers, to make more challenging work, to experiment and do things we’ve wanted to do, but haven’t had the time or resources,” said Mendoza.

ARS PHOTONICA > All > Cuppetelli and Mendoza: The Art of Interference

This website uses cookies to improve your experience while you navigate through the website. Out of these, the cookies that are categorized as necessary are stored on your browser as they are essential for the working of basic functionalities of the website. We also use third-party cookies that help us analyze and understand how you use this website. These cookies will be stored in your browser only with your consent. You also have the option to opt-out of these cookies. But opting out of some of these cookies may affect your browsing experience.
Necessary Always Enabled

Any cookies that may not be particularly necessary for the website to function and is used specifically to collect user personal data via analytics, ads, other embedded contents are termed as non-necessary cookies. It is mandatory to procure user consent prior to running these cookies on your website.